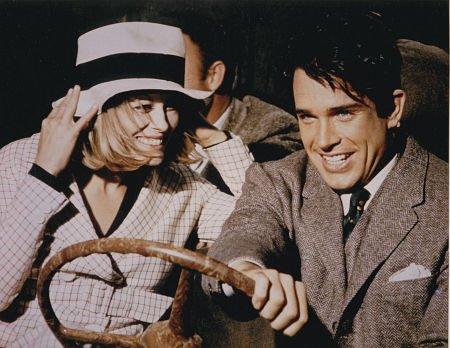 The 1967 Bonnie & Clyde is another classic that I hadn’t seen. Warren Beatty and Faye Dunaway turn in brilliant performances in a film that ushered in a golden age of American film. They play the folk heroes Bonnie Parker and Clyde Barrows, with earthy wit. We see that these flawed robbers are real. It’s a bold move to have the male lead Clyde be impotent. I can’t think of a film that’s done that recently.

The pair and their gang start out with failed attempts to hit banks during a time when the depression hit many first. In one bank, there just wasn’t any money. Mannerly and kind, Clyde asks a farmer whether the money on the bank counter is his or the bank’s. When he learns it’s the farmer’s he lets the man keep it.

The tension builds as the gang gets famous. The stakes heighten and we’re always a step ahead realizing that the only end for this this couple is death, a bloody death.