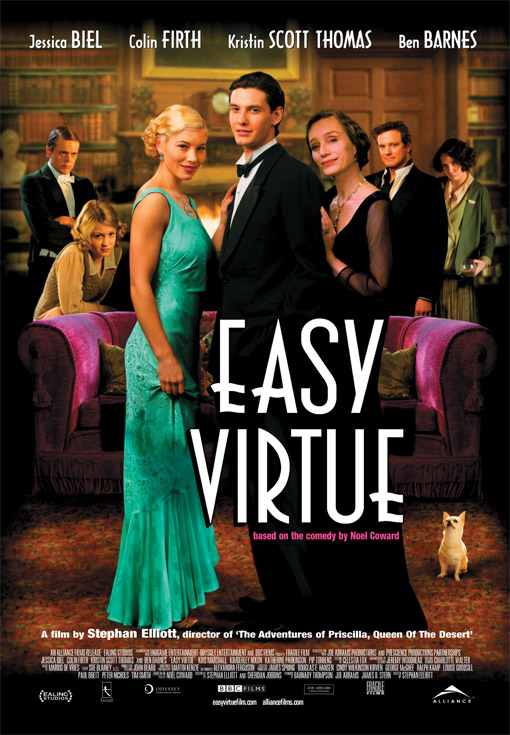 En route to Beijing I watched Easy Virtue with Jessica Biel, Kirstin Scott Thomas and Colin Firth. It’s an adaptation of a Noel Coward play, so you can expect witty banter throughout and a upperclass English setting. Easy Virtue follows Biel, an American divorcee and her new husband to his home in the countryside. Biel’s character, Larita, is icily welcomed by Scott Thomas, the husband’s disapproving mother. Biel can do no right to fit in. She sits on her new mother-in-law’s adored chihuahua and kills it. Then she tries to cover up the dogslaughter unsuccessfully. Every time she tries to help out she makes things worse. (Really? This was all rather far fetched.)

The father-in-law, played by Firth seems sympathetic, but he’s emotionally checked out of this family so he’s of little help (though toward the ending one can say he checks back into life). The husband just can’t understand why his wife is so unhappy and he doesn’t figure out how to make his wife happy though she repeatedly asks him to move back to London.

It’s not a bad movie, but it didn’t win me over either. I could see that Larita would have been smarter to hang back and see how this society worked. She did try to make some alliances, but none worked. Clearly Coward wanted to critique the snobbishness of the upperclass, but it was hard to believe that the matriarch would be so totally elitist. I think that’s because class has changed even in England and now things are warmer between the US and England. So the main problem I see is just that the film is dated.

Alas, now that I’m back in China I can’t upload photos. Ugh

My cousin lent me this documentary that chronicles the life of a young Palestinian boy and his friends. It’s riveting, shocking and so upsetting. I liked watching the boys and getting a view of this conflict through the eyes of a child. I was quite angry with the adults in his life. His mother seemed so passive and the militia men were using the boys and encouraging them to fight and be martyred, when I wanted them to say, “This is an adult job. You’re job is to be a kid, a student, a son.”

The filmmakers wanted to make a pair of films one with Palestinian children and another with Isreali’s but events in the production made that impossible. While the movie is so unsettling, it is well worth watching.