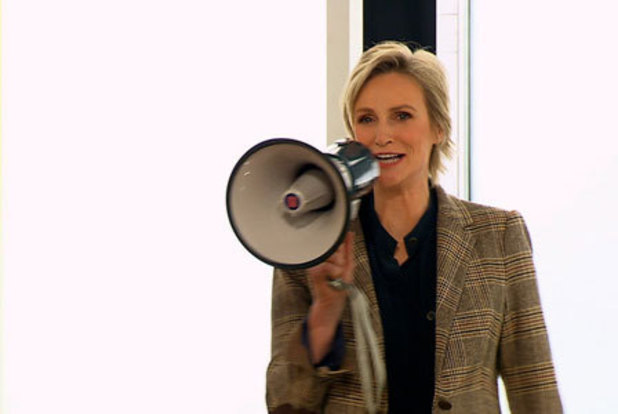 The theme was fearlessness and Jane Lynch was the mentor this week and she was a breath of fresh air. Not that the other cast members weren’t but Jane has an unique energy level. The contestants had to sing a rap song for their homework. They chose to do choreography involving everyone shaking their rear ends at Robert and Jane. Why didn’t anyone think that might be lame? Now that Mario’s gone there’s no one in the group that objects to the ideas.

Aylin and Charlie pledge to be less affectionate. Yeah, right. I do wonder what Aylin’s family thinks now that they can see this series. Turkey is progressive as far as Muslim countries go so they may not really be as strict as she says. A strict family would have watched Glee and then forbid their child to try out.

Lily won the personal mentoring session with Jane, who felt Lily was a young version of herself.

The video was much better than last week. This mash up of Blondie’s “One Way or Another” and Pat Benatar‘s “Hit Me With Your Best Shot”  was a slushie fight in a swimming pool.

Nellie, Aylin and Charlie were in the bottom three. I wouldn’t have had Nellie at the bottom this week. Yes, a person has to come out of her shell, but the mentors don’t have to go out of their way to insist that she be more blatantly sexual. I think she would have done fine. I’m not as impressed with Blake or Michael. Aylin was giggling and Charlie didn’t control his autism spectrum stuff so he had to perform.

Charlie went home despite a robust performance of Tom Jone’s “It’s Not Unusual.” I wouldn’t be surprised if next season we saw a character with autism of Ausberger’s, but the actor won’t actually have the condition so he’ll be easier to direct.

I’m glad Nellie and Aylin have another week.

Trivia: Aylin graduated from my sister and brother’s high school Loyola Academy, a Catholic school in Wilmette. It’s a rather progressive school so I’m surprised such strict parents would send her there.