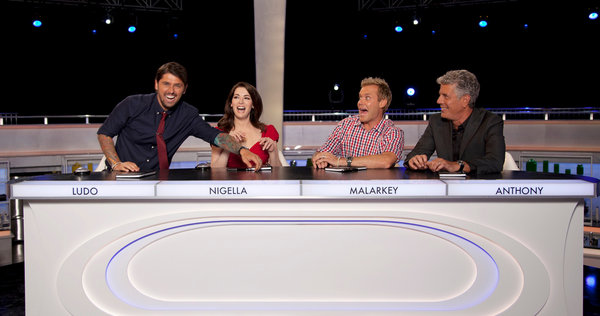 There’s a new reality food competition show in town, ABC’s The Taste. It features Anthony Bordain, Nigella Lawson, Brian Malarkey, and Ludo Lefebvre. So we have two Americans, a Brit and a French chef, only one woman though. I figured Anthony would eat Nigella alive, but they seem to respect each other. Time will tell if as the competition gets more intense,  the judges will duke it out more. With Reality TV forced drama comes with the territory and we all expect it.

I watched the first episode, which was two hours and I wish had been 90 minutes or an hour. After awhile you got the drill and it became a drill. The premise is that each chef will choose four contestants for his or her team. That process was the theme of episode 1. Contestants have an hour to make a dish and put just “a taste” i.e. one large mouthful on a ceramic spoon. In a blind tasting the judges decided whom to keep and whom to reject. When two judges chose a person, they then offered reasons why their team would be best and the contestant chose a chef.

They tested dozens of tastes and more were awful than were good. By the midpoint it became clear that simplicity and good technique would win judges over. People who packed too many flavors into a spoon were rejected. Lots of backstories were mixed into the competition. That must be an ABC thing, because the Food Network doesn’t do that much. One contestant was an older Jewish woman who wore headbands and glitzy knitwear. She wanted to win the $100,000 so she could take care of her husband. Several people had hard luck stories and some quit their jobs to be on the show. Not the wisest move in this economy, though the publicity may earn them a better job. I found the woman from Mississippi who cooks in her small trailer, where the fire alarm goes off in the kitchen daily to be quite entertaining and I hope she’s around for awhile. The David and Goliath aspect of amateurs beating professionals is a good touch.

I’m an Anthony Bourdain fan and that’s what drew me to the program. Yeah, he can be mean, but he also shoots straight and the truth that stings is better than a pretty lie that deludes. It’s clear that The Taste isn’t as cool or interesting as his Travel Channel programs but it’s not going to ruin his career.

It’s not as good as Chopped, not yet at least. But it’s also not a bad way to spend an hour when you just want to chill out and you don’t want violence or sheer stupidity.