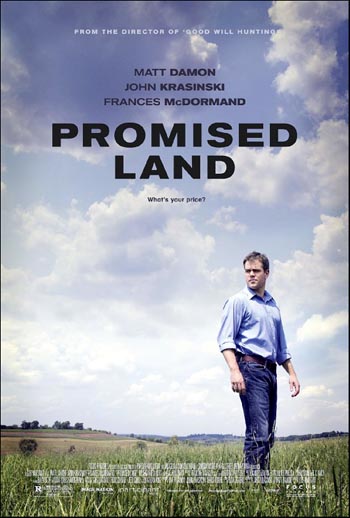 While certainly agitpop, I enjoyed Promised Land starring Matt Damon, John Krasinski, Frances McDormand, and Hal Halbrooke. It’s the story of a newly promoted natural gas employee whose job is to get family farmers to sign over their land rights. Then Global Oil will begin fracking, which can go terribly wrong, contaminating the land and water for generations. Of course, Damon’s character leaves that bit out of his sales pitch. He and McDormand visit a small town in Pennsylvania promising these good folks that they can make loads of cash and threatening them that this is their last and only chance at a good life for their kids.

Damon’s character, Steve Butler, comes from a small town in Iowa that’s hit economic hard times since a Catapillar plant left town, probably for China or some place with cheap, cheap labor. Steve keeps assuring himself that he’s a good guy and his conscience starts to flare when Krasinski’s environmental advocate comes to town. The two compete and time and again Steve’s luck and charm run out.

The story has some twists at the end and reminded me of a modern version of Upton Sinclair’s Oil! – which we all should read. It’s a palatable way to learn about fracking and corporate practice. There’s a B story with a love triangle, but that subplot isn’t as strong as it could be.

All in all, I’d give this a thumbs up.