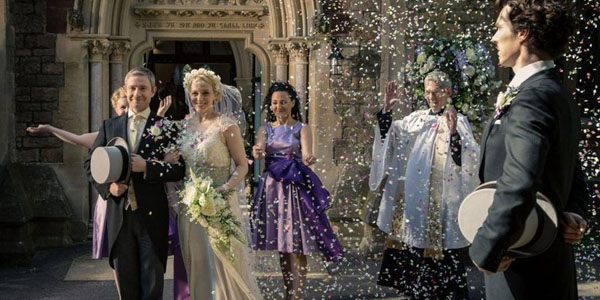 John Watson marries Mary Marston in this episode. Yet Sherlock in many ways overshadows the couple, as one would expect. While the secondary characters like Mrs. Hudson are excited for the couple most are worried about Sherlock. How will he handle this change in his friendship with Watson? I’d rather the big question surrounded solving a crime and capturing the criminal.

The episode did have its bright spots: the costumes were splendid as were the settings. I really liked the bright yellow walls in the place where the reception was held.

The episode started with Lestrade desperately trying to capture three elusive bank robbers. A series of scenes shows the police’s near misses over the course of a year. (Why wasn’t Sherlock brought in to help?) Just as Lestrade and his officers are about to make their arrest, he gets a text from Sherlock. “Help!” Though capturing these robbers is crucial to Lestrade, he decides to race over to 221 B Baker Street to help Sherlock. Since he thinks this plea indicates a dire emergency, Lestrade calls the station to send loads of officers over to 221 B.

But wouldn’t you know it was a big misunderstanding? Sherlock just needed a question about John’s wedding answered. If we hadn’t seen this sort of joke before it would be funny. The show’s done this before with John racing to Sherlock’s aid for a false alarm. While Sherlock’s behavior wouldn’t change, those around him would learn and would think twice before sounding the alarm or racing to him. Why didn’t Lestrade call first? He’s not an idiot.

The show was uneven to me. Because of all the attention paid to the wedding and how Sherlock would cope, I felt the show was off kilter. The first crime we see involves the murder of a Royal Guard and that was undertaken mainly as a diversion to get the boys out of the house.

There were some scenes with Mycroft which seemed superfluous. Since the episode is entitled “The Sign of Three,” and does borrow characters’ names from “The Sign of Four, I’d hoped we’d see some version of the annoying, and humorous Abernathy Jones, whose in that novel. A modern Abernathy Jones could be hilarious or vexing and intrigue us all. We don’t need Mycroft in every story.

The crimes seem tacked on as if its a bother to deal with them, which shouldn’t be the case. They are the crux of the series. Jonathan Small, the murderer, has a personality and back story that’s paper thin. In the original there’s much more dimension to him.

The writers fill the time with sequences that wore out their welcome fast. I didn’t need to see a protracted stag party/pub crawl with Sherlock and Watson getting plastered. Sure, if you must, show them getting drunk, but do it quickly. The humor of the drunk stumbling around is of the lowest order. I can do without the cliché. Also, the wedding speech dragged on. Though it was interspersed with lots of flashbacks, it still dragged. The speech contained some touching moments and did provide some exposition, but it went on far too long.

After last week’s episode, “The Empty Hearse,” which was weighed down by nods to fans and fan fiction, this episode made me long for Jeremy Brett‘s Sherlock Holmes. While I’m fine with the idea of deviating from tradition, I do still want a good story and not a potentially good story hidden amongst easy gags. It seems like writers Moffat, Gatiss and Thompson, are drunk on the show’s popularity and have taken to writing to the giddier fans. I could excuse a fluffy episode like this if we weren’t limited to three Sherlocks a year.

Not to harp too much about the original, but in the novel, we do learn why John so loves Mary. He worries about whether he’s too poor for her as she’s the heir to a fortune. He describes her character and in the end he is able to propose. I have liked the character of Mary Marston played by Amanda Abbington does a fine job, but she doesn’t have much background. She’s a beautiful cheerful woman who doesn’t try to divide these friends, but there’s no sign of why John’s marrying this beautiful, cheerful woman rather than another. In the book, that was clear.