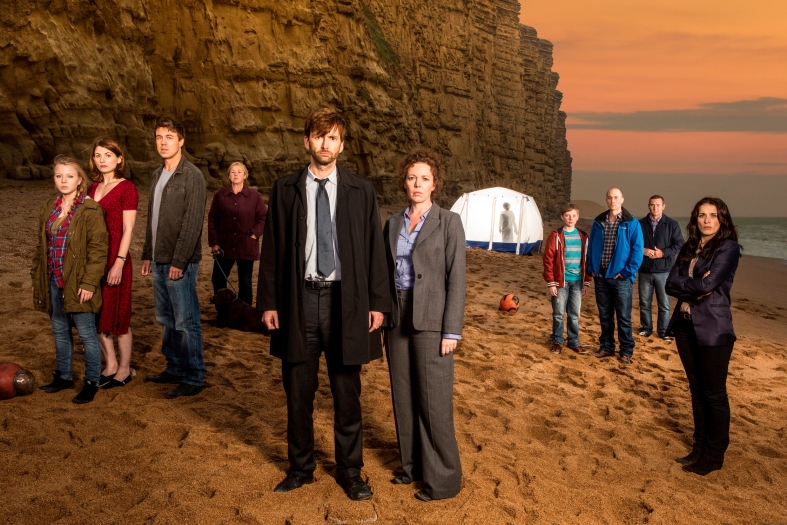 I finally saw the last episodes of Broadchurch, the detective mystery about the murder of a young teenaged boy Danny in a small coastal town in England. Alec (David Tennant Doctor Who #10) is a brooding detective, with a secret past, who arrives in Broadchurch when Danny’s body is discovered. Ellie (Olivia Colman of Rev) is the local detective who expected to get the job Alec got. For the most part they get along well, it’s not oil and water. Colman’s a patient positive woman so she handles her disappointment with grace and tries to draw out and educate Alec to the ways of this closed, small town.

It takes 8 episodes to discover the murderer. At times the story drags. A lot of time is devoted to the emotions of Danny’s family and the intrigues and secrets of the town. Most are dead ends, but pursuing them destroys some lives and relationships. While I did feel the characters seemed like real small town folk, the dialog at times seemed written, rather than real.

I saw the first episodes on a flight a year ago. It’s not on Netflix and I wasn’t so wrapped up in the story that I wanted to buy it. I liked the actors especially Tennant and Colman, but the program doesn’t have the writing of Luther or Spiral. While it was better than a CBS detective program, it wasn’t worth buying. Finally, the library got the DVDs. The ending was a surprise but the last episode was padded big time. I’d have to rematch the series to determine whether I feel it was well plotted. As it is, I just don’t care enough to invest the time.

Broadchurch is getting translated to “American” on Fox and will be called Gracepoint. The story seems the same, too similar and will be 10 episodes. I guess viewers are in for more padding unless the extra episodes will just make up for the commercials. Tennant will play the American version of Alec, by donning a bad haircut and speaking with an American accent. Colman’s been replaced by a tall blond woman. What would you expect from an American network? If they’re bold and smart, they’d make the murderer someone different. I wouldn’t invest 10 hours to see the same result.