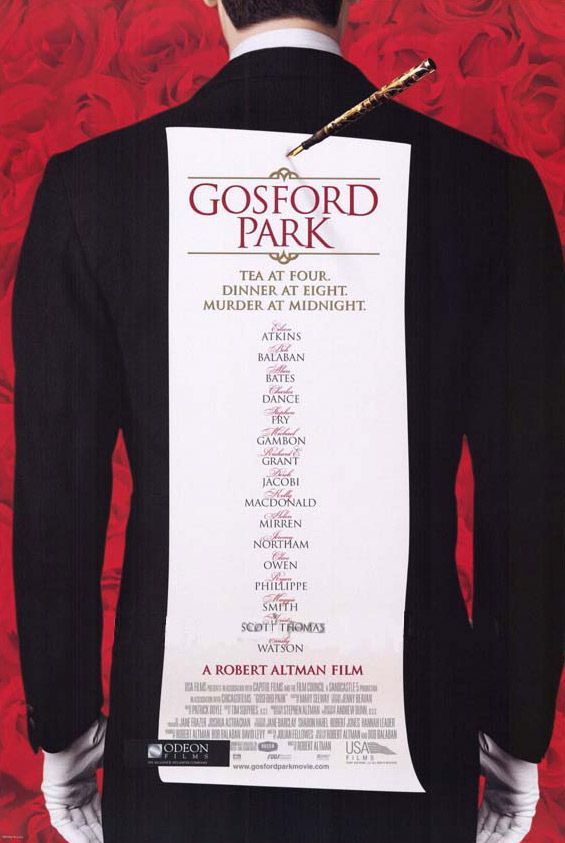 I began watching Julien Fellows’ Gosford Park with high hopes. After all, I love Downton Abbey and Fellows won the Oscar for this screenplay.

I was disappointed. Sorely. Despite an all star cast, Gosford Park lacked a single character I found charming or likable. There was one Scottish maid who seemed mousy but nice. She wasn’t enough to carry a film of this length. The characters all came off as cold, greedy and indolent. The upperclass people spent money like water and had nothing but disdain for each other and got no joy from their money.

The downstairs servants weren’t much better. Though not as spoiled they were all out for themselves in a different way. No warmth at all. They just wanted to get their work done with as little fuss as possible. Anyone who upset their system was glared and scoffed at.

One theme that rose was how the servants felt overshadowed by their employers. I can see that, but the grass isn’t always greener. If they worked in offices, their lives would also be precarious and as one of my new colleagues asserts if you work for one company for a long time, that company forms your identity to a great extent. So if they traded their apron for a factory uniform it’s not sure that they’d be happier or more secure.

Sexual harassment was rampant as the lord of the manor couldn’t keep his hands to himself, but in a store, office or factory women run into that too.

For the first 75 minutes we see rich people bicker, whinge and finagle for money. Now and then someone says something they think is droll and smokes a cigarette. Then the plot picks up when the lord who’s a churl gets murdered. Yet the investigation is so incompetently carried out that I just couldn’t buy it. In the end we do learn who did it, but by then I barely cared.

Fellows sure deepened his understanding about character and plot by the time he started Downton Abbey.