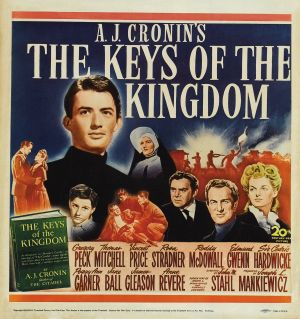 In Keys of the Kingdom, Gregory Peck plays Father Chisolm, a young, humble, authentic priest who is sent to China after a lack of success in his home of Scotland. His mentor, a bishop feels Fr. Chisolm will thrive in China.

The story’s told in flashback. It begins with an old Fr. Chisolm getting reprimanded and told his unorthodox teachings are forcing him to be removed from his hometown parish. The bishop who makes this threat is staying at Chisolm’s rectory. Before he goes to sleep, he picks up Fr. Chisolm’s memoirs and reads of his extraordinary life.

Chisolm’s father and mother were killed in a riot against Catholics. He’s brought up by and aunt and almost marries as a young adult but circumstances lead him to stick with his choice of the priesthood. As a young priest, his parishioners don’t appreciate his questioning and some of his theology. His mentor has a hunch that Fr. Chisolm would be right for a deserted mission in China.

When Fr. Chisolm arrives in rural China, every believer has left as they really only came for the free rice. The church is in ruins. Slowly, Fr. Chisolm rebuilds and stays true to his principles and beliefs even if it means losing the church or being treated like an inferior by a haughty former classmate.

At one point the political climate in China shifts and warlords threaten the mission.

I found the movie compelling and was better than average for avoiding the stereotypes so common in the 1940s. His performance is carries the film and I would never have guessed it was Peck’s second film. It seemed like a biography, but apparently it’s based on a novel, not a real life.

My only complaint is I wish they hadn’t skipped through the years of turmoil and war in China. They show early 20th century violence, but explain and show little of the revolution that erupted. The film jumps from one attack when Fr. Chisolm was probably in his late 30s to Chisolm as an old man. By weaving in Fr. Chisolm’s ecumenical beliefs and his strong friendship with an atheist, the film feels modern.