Based on John le Carré’s novel, The Spy Who Came in From the Cold stars Richard Burton as a jaded, used, alcoholic spy, who’s seemingly put out to pasture then pulled back in when the blue bloods running MI-6 need him. It’s a trip back to the cold war. Michael Sragow’s essay for the Criterion Collection aptly captures the essence of the film:

Martin Ritt’s 1965 movie of John le Carré’s first great novel (and first best seller), The Spy Who Came in from the Cold, declares “a plague on all your houses” to capitalists, Communists, and ruthless intelligence operatives. It’s one espionage movie that neither comes on like gangbusters nor sneaks up on you like a cat burglar. Instead, it creates an atmosphere of anguish, fear, and rage that intensifies each pause in the action and gesture of the actors, leaving viewers hanging on every word of the sometimes cryptic, sometimes eloquent dialogue.

Alec Leamas (Burton) is a middle-aged, run down spy. His boss called “Control” offers him a desk job, which he refuses leading to a scheme whereby Leamas is to take a boring, low paying clerk job at a library, where he meets the fetching Nan Perry (Claire Bloom, who at one time was romantically linked to Burton). The romance redeems Leamas, but that doesn’t matter to MI-6. They propose that Leamas return to the service posing as a double agent with East Germany. 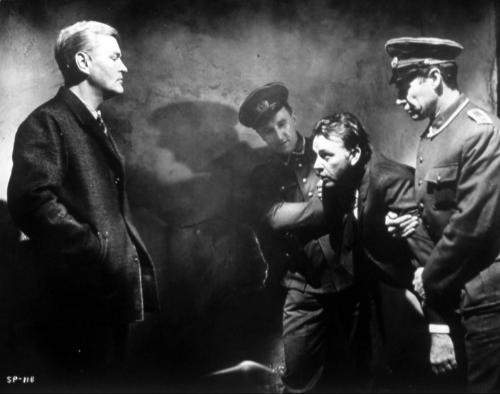 He goes along with the plan to be taken by the East Germans and cosy up to Fiedler, an East German Jewish intelligence officer who seeks to convict Mundt, a double agent who’s leaked secrets to the west. The counterpoint of the tender relationship with Nan and the sordid world of espionage add a compelling tension.  The plot twists and turns while engaging in incisive repartee. The unexpected ending chills to the bone.

The Criterion Collection extras include a candid interview with le Carré, who while he didn’t hate the film, didn’t think it was that great and a short documentary on le Carré’s biography focussing on the influence his duplicitous father had on his joining MI-6, illuminate the film.