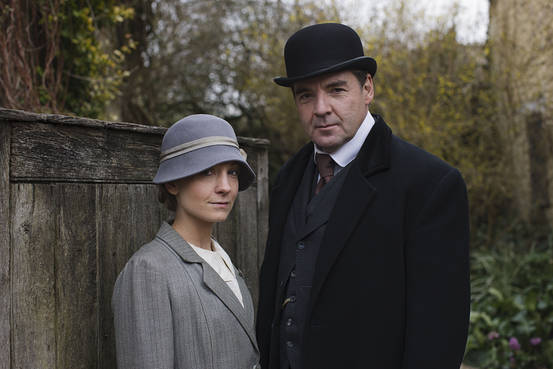 I don’t know why I hope for a faster pace with Downton Abbey, but I often do. I should know by now that Julian Fellows likes to draw things out; it’s his style.

I had hoped we’d see Mr. Carson and Mrs. Hughes’ wedding this week, but we didn’t. Instead we saw them discuss and plan, not always harmoniously, the wedding. Thankfully, only Lord Grantham thought decorating the servants’ hall would work as a reception venue.

Afraid that he’ll lose his job, Thomas has started job hunting. He’s finding it’s slim pickings and that he’s got it pretty good at the Abbey. His interview did not go well as he learned that at this estate he’d be “chief cook and bottle washer.” They expected him to do the work of 3 or 4. Thanks, but no thanks.

Edith’s editor is giving her more trouble. Then speak on the phone a lot and he won’t listen to her. I expect once she’s got the gumption, she’ll fire him. She certainly should. One dramatic moment came later in the show and dealt with Marigold. Mrs. Drewe, the farmer’s wife who took Marigold in, doesn’t realise Edith is Marigold’s mother. Thus she wants Marigold back. It’s odd, but she seems to care about Marigold more than she does her own children. We’re led to see Mrs. Drewe as unstable. At a village agricultural fair, Mrs. Drew kidnapped the girl. Everyone scrambled around trying to find her and in the end they did. This storyline was oddly placed and there wasn’t a minute when I didn’t think they’d soon find Marigold.

Anna confided in Mary about her fertility problems and Mary escorted Anna to a doctor, who examined her and told her that she just needs a simple operation when she gets pregnant again, and she should be able to have children. Anna’s on cloud nine. I bet she’ll have a child by the end of the series.

Mary proved herself to one of the local agricultural bureaucrats (i.e. the man who arranged the fair).

The issue with the hospital remains and Violet and Isobel exchanged barbs. I do wish it were over an issue that I cared about more. Then the quips would have more potency.

Daisy talked about taking some exams and Mr. Mosley encouraged her. The world’s changing as we’re constantly reminded (I could do with more “show, don’t tell” with this theme) so it’s wise to be prepared.

The dresses were splendid. Cora didn’t get to do much, but neither did Robert. And yet the acting is strong enough to carry an okay story.