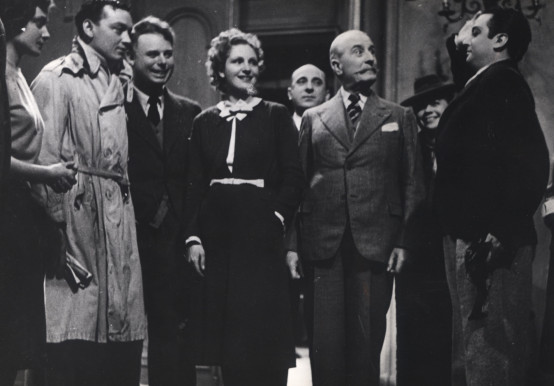 I had to watch The Rules of the Game under strange circumstances. My DVD only would play the film with the commentary going. Thus I read the subtitles and once in a while got a snippet of dialog without English commentary. I prefer first viewings without the expert’s take, but perhaps in this complex film the commentary was best.

Jean Renoir’s The Rules of the Game depicts two parallel classes, the upper middle class and the servant class. From the bourgeois Christine, Robert’s Austrian wife has disappointed her would-be lover Andre, an aviator who’s just completed a round the world journey. Andre gets no satisfaction from the clamoring crowd or the inquisitive press. Christine didn’t come so the whole flight was for nought.

Christine’s been in her Parisian home with her husband Robert and her maid Lisette. Robert’s tiring of his lover Genevieve and Lisette’s tired of her husband Schumacher. All are leaving for the countryside where a web of relationships will tangle creating a fine mess pulling the film from farce to tragedy with a surprise ending.

Renoir saw WWII coming. He also saw his society drunk on frivolity, careening over an edge. The Rules of the Game is a rare film that begins with light-hearted, harmless fun, but ends with broken hearts and a tragic death. The characters who all play at love see the consequence of their erroneous worldview.

The film is beautiful and many scenes are complex dances. Renoir was ambitious to offer such sophistication and it wasn’t till decades after it was made that The Rules of the Game was considered a masterpiece, one of the finest movies of all time.

If you think you’ve seen the actor playing Robert before, you have. He was ran the roulette table at Rick’s Café in Casablanca.

I’ll definitely watch this one again. 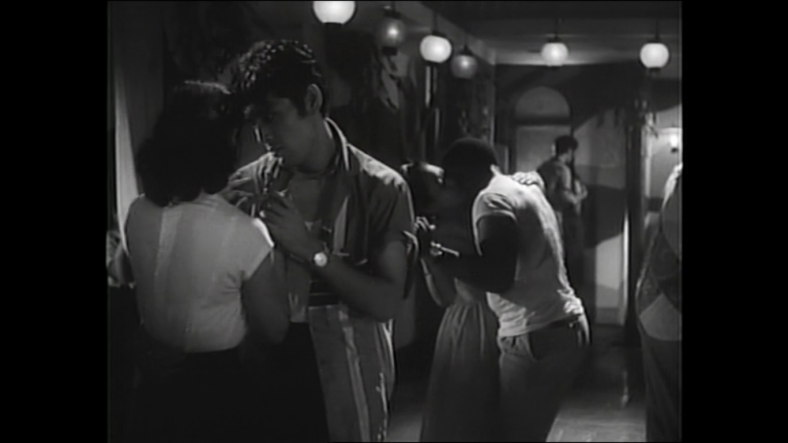 Mask Kobayashi paints a bleak picture of Tokyo during the 1950s in The Black River. Set in a neighborhood beside a U.S. Army base, Kobayashi shows how Japan’s become corrupt. When Nishida, an upright student/bookseller, moves into a decrepit apartment building that’s more of a shanty than a building, we meet a motley crew consisting of parasites, prostitutes and a couple good guys who don’t stand a chance of fighting city hall given that most of their neighbors would sell out their own mother given the chance.

Soon both Nishida and Killer Joe, a Japanese low level gangster, fall for Shizuko, a lovely, innocent young woman. Joe shows his colors early on by ordering his hoodlum pals to attack Shizuko. It seems they’re going to rape her, but Joe happens by and fights them off. He professes his love and while Shizuko is briefly wooed, Joe then forces himself on her and she’s reviled. The next day Shizuko visits Joe to tell him she was going to report him to the police, but decided she’d be willing to marry him to salvage her reputation. What a sacrifice! It’s hard to believe that a woman would even have to consider such an option, but in some times and places that’s how people thought. 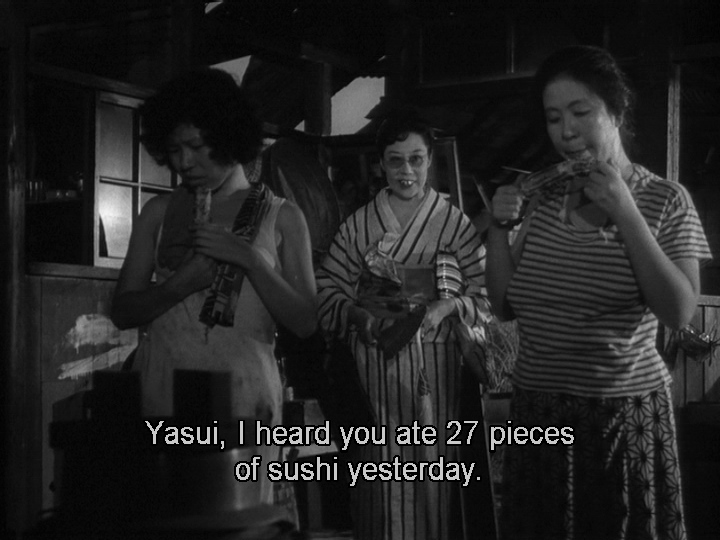 Meanwhile Joe’s plotting with the greedy landlady to evict the residents of the shanty. Both will make out like bandits if they can get the not-so-beautiful losers out of the place.

The film then criticizes the greed, pettiness and lack of morality in society without blaming the problems on the American Army.The Black River shows how the characters contribute to their own troubles. Certainly, Shizuko was a victim in many ways, but she winds up but her choices also lead to an end where I saw no happily ever after for her.

It may be time for such a charity.

The film opens with reporters and detectives invading the wedding between the handsome apparently straight as an arrow Nishi to Yoshiko, the pretty and disabled daughter of CEO Iwabuchi, whose corrupt deals caused Nishi’s father’s suicide. Nishi has positioned himself in Iwabuchi’s corporation as his assistant and married into the clan to exact revenge for his father’s death.

Disrupted by the appearance of a wedding cake that looks like the building Nishi’s father killed himself and by the arrest of a loyal, timid employee indicate the disaster of the marriage. Nishi has spent five years trying to get into Iwabuchi’s inner circle to expose the kickbacks and violence that fueled the success of Public Corporation. Iwabuchi and his colleagues are cold blooded, willing to goad their employees to suicide if it helps them keep their dirty cash flowing in.

While the film differs from hamlet, there are many intended parallels. Nishi’s obsessed with his father’s death. Yoshiko is very much like Ophelia and she meets no better end. While Nishi’s mother never married, Kurosawa uses gray flannel ghosts to freak out his characters.

The evils of corporate greed have bene a common theme in modern film Somehow Kurosawa, while showing blatant, unrepentant evil, doesn’t seem to have exaggerated. The executives and their conniving seem all too real.

Every scene had me riveted and the ending was a complete surprise, though it was perfect. It’s a film the I won’t soon forget.

A Western woman, who’s taken on Japanese style and speaks Japanese very well, asks people in Tokyo what they envy in foreigners.