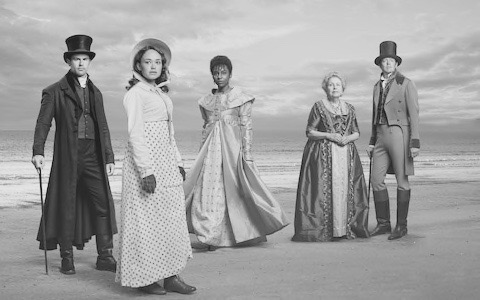 PBS/BBC’s Masterpiece drama Sanditon just hasn’t grabbed me. Based on an unfinished Jane Austen novel, it actually seems like a phlegmatic version of one of Austen’s masterpieces. The cast features Charlotte, a bright heroine who to me seems like a cross between Lizzy Bennett and her drab sister Mary with a mix of her friend Lydia. There’s an arrogant hero, who I expect will change after learning from the heroine. There’s a strict, rich widow and a fop or two. The only new character is a woman from Antigua who’s Black. There’s a possible injection of orignality, but like the others this character doesn’t do much for me.

The story starts with a couple getting stranded by Charlotte’s house and when this real estate developer invites Charlotte to his seaside development for an unknown period of time, her parents agree even though Charlotte’s father is wary of the wild ways of seaside villages. I couldn’t believe that even if it was the norm to let your young daughter go off with strangers, that this father wouldn’t have. Of course, money’s a big issue and the developer’s out of cash and his business is in peril.

The woman from Antigua, though an heiress, is treated with prejudice by all the social set she encounters. Her family has died and she’s under the supervision on her guardian, but she has a fierce desire to return home.

All in all, I think the story is predictable and I miss Austen’s perfect wit. To me the show doesn’t measure up to Poldark, Victoria, Mr. Selfridge, or The Paradise. I wish they’d add a season to either of those shows than mess around with an unfinished Austen novel.