Lon Bannon’s mission is to track down his uncle Hud Bannon, who’s hot footing it out of his lover’s house just before her husband gets home. Lon’s got to bring his prodigal uncle home. A heifer has mysteriously died and grandpa, Homer Bannon, has called in the county vet, who soon confirms his worst fear the herd has foot and mouth disease. They’ll all have to be put down.

Straight-shooter Homer’s life work is about to be totally wiped out, yet his cavalier son Hud maintains his que sera sera attitude. Just when the family needs wisdom and prudence, Hud keeps carousing, sometimes with his teenage nephew in tow. Lon looks up to Hud, even though he can see his failings.

Father and son constant argue and judge each other, though Homer has more wisdom than Hud. Hud believes their conflict dates back to the night he got into a car accident that killed his beloved brother, Lon’s dad. Homer disagrees. That resentment has been buried, Homer insists. His contempt comes from Hud’s values, or lack of.

Patricia Neal plays a sharp-tonged housekeeper, whom both Hud and Lon admire.

Hud’s a compelling film that made me care about every character and the survival of the traditional family ranch.

This coming week my mystery book club was going to meet to discuss Agatha Christie’s Death on the Nile. I listened to the audio book and watched the movie. The audio book’s narrator David Suchet was terrific and brought the story to life.

While on a vacation in Egypt Hercule Poirot, the Belgian detective who’s forever telling people he isn’t French, gets on board a boat and finds his fellow travelers keep getting bumped off. There’s a love triangle consisting of Linnet, a wealthy heiress, Jacqueline her good friend and her Simon new husband, who was in love with the friend. There’s a German doctor, a rich, imperious woman and the young companion who resents her boss. The heiress’ trustee, her London lawyer her maid, and the maid’s married lover round out the cast. 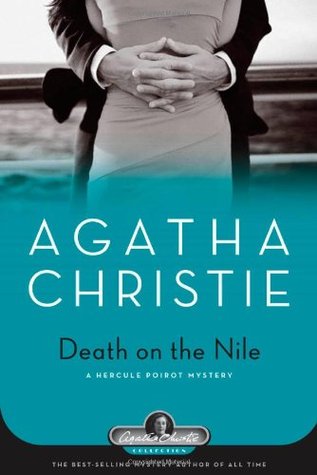 One eerie element to the story is that Jacqueline’s stalking Linnet. Everywhere they go Jacqueline’s there. Ever jumpy, things get worse when Linette is found dead. Poirot soon suspects everyone. Then the bodies start to pile up. The maid is found dead and then a third murder follows. Poirot finds almost everyone has a motive.

With Peter Ustinov, Mia Farrow, David Niven, Angela Lansberry, Bette Davis, Maggie Smith and Olivia Hussey, the film is chock full of stars. Alas, I found the story in both formats lacking. I wasn’t pulled in to the story as Poirot didn’t use much hard evidence. It seemed that his main talent was supposition and conjecture to find possible motives. He doesn’t draw me in the way Sherlock Holmes does. I was left craving a better plot and more complex characters. I felt Christie just took the idea of Murder on the Orient Express and just made a few small changes.

When she was a teen, Turquoise Queen won the Miss Juneteenth beauty contest. Now she’s a single mom and her daughter is old enough to compete in the contest. The high point of Turquoise’s life, which hasn’t turned out how she expected. She had such promise, but here she is approaching middle age, working at a restaurant, cleaning toilets, no glamor, no excitement.

If her daughter were gung ho about the pageant that would be one thing, but Kai doesn’t care that much about becoming Miss Juneteenth and she’s outright against her mom’s idea for the talent portion of the competition.

The film is a slice of life and offers a touching, geniune relationship between a mom and a daughter. I saw the film at Sundance. You can find this film on Amazon Prime. It’s great for family viewing.

Simon and Martina, two of my favorite YouTubers, show us what it’s like living in Tokyo during the coronavirus panic.

Love at first sight has its challenges as Leslie (Elizabeth Taylor) and Jordan (Rock Hudson) find to when they rush into marriage. Texas rancher/tycoon Jordan visits Maryland to check out a horse he wants to buy. He returns to Texas with not only a horse, but a wife. Neither is easily tamed.

Now some men love strong women, who question big ideas, but Jordan wasn’t like that. He’s a traditionalist and a bigot. His charm and good looks, attracted Leslie, but through most of the film it seems like his notions of keeping poor people in their places, including a sick baby of Latino heritage has to go without a good doctor, drives a wedge between his wife and him.

A fish out of water, Leslie tries to fit in. She’s not warmly received by Jordan’s sister who has run the house and ranch for years. The townspeople have never met anyone from out East so they don’t know how to accept an outsider and Jordan’s little help as he just figures Leslie should fit in.

Jordan loathes Jett Rink (James Dean), a young handsome ranch hand who inherits a small plot of land from Jordan’s sister. Leslie needs people other than her husband to talk to and she sees no problem befriending Jett. This makes Jordan’s blood boil. He also disapproves of Leslie’s friendliness with the Latinos who live in the village. He wants her to stay home and not make waves, which is just not in Leslie’s nature.

The film jumps ahead to the time when Jordan and Leslie’s children are grown enough to be choosing careers and spouses. As in most families, the children have minds of their own. Jordy, their son, marries a lovely Latino woman, but both parents, particularly Jordan are prejudiced against her. What’s more Jordan disappoints his father by choosing to become a doctor rather than manage the vast ranch that’s been in the family for generations.

One daughter marries a fine man, who wants to ranch, but he wants a small ranch so Jordan’s ranch is unwanted. The other daughter becomes smitten with Jett, who’s become incredibly wealthy. Of course, this leads to major trouble.

The western landscape is grand, but dry and brown. Leslie surprised me with her ability to get Jordan to see that she does love him, but will often disagree with him. As the years passed, Jordan’s development in terms of opening his mind to other ethnicities or women’s roles changed very little. I was surprised that Leslie put up with him, but the story’s from another era. A more modern character would have given up on a husband, who was so stubbornly biased.

When the film shifts in time by 20 years or so, the main characters all get gray, but their skin doesn’t age and their bodies are still hard and fit.

All in all, while the film features big stars and has romance and action, I felt I just had a superficial view of this family. There was never a point where I felt the family was on the brink of disaster. Jet was, but he’s not the central character. He was an outsider, who wanted social acceptance and success. Yet, I didn’t feel I knew enough about him. I felt the characters were all more distant than most. Thus it’s not a film I’d watch again and again.