This should delight you. I loved every minute. It just gets better and better as it goes and makes me so happy I was born when I was.

This song has stuck in head. It’s one of Catherine’s better moments, but then this woman shines when she’s got the full attention of three men.

(The film never shows her with other women. I don’t think she can be anything other than the queen bee.)

Jackie Evancho has grown up. Here she sings with Il Volo.

There’s something about old musicals that’s so uplifting. I’ve seen White Christmas a few times, the best viewing was on Saturday at Chicago’s Music Box Theater with all the surrounding fanfare: Santa, jingle bells, carolers and organist.

The film probably wouldn’t be made today. The script would be rejected. It’s not a dark or edgy film. There’s no desperation. No here characters are perfect, but they all have spunk and hope, which is why by the end of the film, I left the theater filled with cheer.

The pair meet a pair of sisters, played by Rosemary Clooney and Vera-Ellen who’re trying to scale the ladder into showbiz. They’re talented, but are just starting out. The younger sister schemes to get the famous Wallace and Davis (Crosby and Kaye’s characters). Both Crosby and Kaye are enamored with a sister, but you know romance will not be easy.

The crux of the story revolves around the plight of Wallace and Davis’ old general, who owns a failing Vermont Inn. The general feels like a failure and misses his army camaraderie and success. No one’s coming to the inn because there’s no snow for skiing. Soon Wallace and Davis get the sisters to help them change the general’s fate.

The characters all had a lot of elegance and style. The costumes were bright and well tailored. They spoke with rhythm and intelligence. There’s no offensive language or swearing. I think all of these things contribute to how good the film makes people feel.

The film has great music and dancing. The jokes, often corny, made me laugh.

Try to find time for White Christmas this holiday. Introduce a younger relative to this cheerful film. Pray Hollywood finds a way to make more films like White Christmas. Not all films need to be cheery, but how about a few new ones that are?

Just discovered this singer from watching MeejMuse on YouTube. A jazzy tune for Christmas.

What was all the fuss about La La Land? Since it got so many awards and nominations, I was quite excited to see it. After doing so, while I grant you it was fresh to see an update of a golden age musical, I wasn’t wowed.

La La Land stars Emma Stone and Ryan Gosling, who’re okay, but not favorites of mine. They seem to lack that star quality that Gene Kelly, Debbie Reynolds, Fred Astaire or Ginger Rogers and the like all had. It’s the story of two young starry-eyed dreamers who go to L.A. to fulfill their dreams. He wants to open a jazz club and save jazz as a genre and she wants to be an actress.

I’ve lived in L.A. and went to pursue my writing dreams. It was an interesting period, more so than the movie and less clichéd. Here we see a sanitized version of two one dimensional characters struggling to “get in.” He’s an arrogant loner and she’s a single girl looking for love and acceptance. I wasn’t particularly interested in whether they stayed together or not. I was surprised that Gosling’s character was such a churl. He’s rude to her. She’s rude back and after awhile they’re in bed, when they both should have kept looking for a better partner (or in his case done some self-examination and improved his attitude and personality and then found someone).

The commercials made me expect Gosling’s character to be a kinder person. I was surprised by how self-absorbed he was. He certainly wasn’t someone it would be fun to spend time with.

The dancing and singing were fine, but neither performer is as skilled at the old greats or as those on Glee. I’d have casted people from Broadway, included a few catchier songs and created characters that were more engaging and unique. Giving both of them good friends would have allowed the story to show why we should care about these characters.

The lyrics of the one song that I remember elude me, but the melody does pop into my head now and again. MGM would have given me songs I want to hear again and again. Song’s that were memorable like “Oklahoma!,”  “I Could have Danced All Night,” “In America,” or “Gotta Dance.”

The ending wasn’t as sad as I think the creators intended.

I’m sorry for this pun, but I just need to say, “I was tepid about Frozen.” I started watching a few weeks back and that I can let a film languish is a sign that it isn’t a winner for me. I did like the art, the infusion of Scandinavian design and incredible icy landscapes, but the story didn’t grab me. It’s the story of Ilsa, a princess who for an inexplicable reason is cursed so that everything she touches turns to ice. Her parents are at their wits’ end, but can’t find a solution. For my money, I’d expect a king and queen to do more, lots more for their heir. Instead this woman is locked up and her younger sister is in the dark as to why her sister, with whom she was so close avoids her.

When Ilsa is coronated she inadvertently brings winter to the realm in the midst of summer. Ilsa flees to self-imposed exile and her sister pursues her. Her sister soon meets a dashing young ice seller, his reindeer and a live snowman. They’re all very endearing and clearly we’re in for some nice songs, a lesson on love, sisterly and romantic.

As I watched I was all too aware that soon Disney will put this up on Broadway or an Ice Pavilion near you. It seemed too predictable and commercial. Though I thought it could be much better, kids would like it. 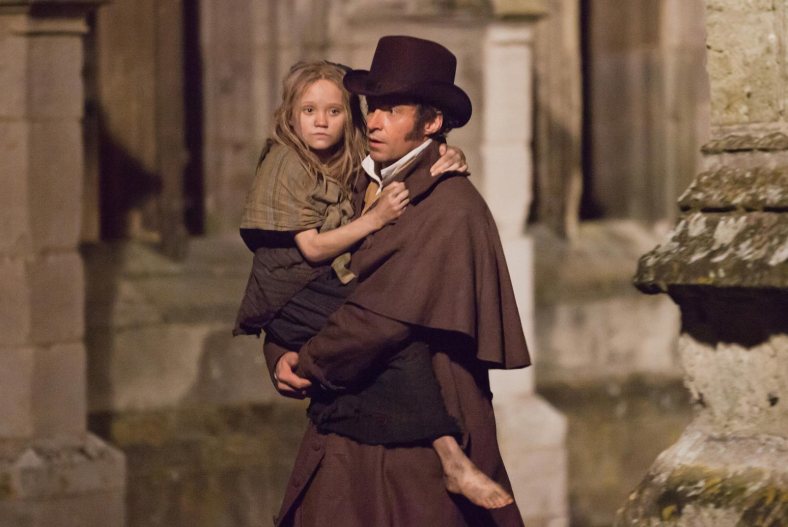 Though Michael Phelps‘ of the Chicago Tribune’s one and a half star review diminished my expectations for the film of Les Misérables with Hugh Jackman, Anne Hathaway, Russell Crowe and Amanda Seyfield et al, I did love the film. While I agree with Phelps that the camera work was bizarre with too many close ups for my liking, the music and performances overcame that fault.

The music was well done and I’d forgotten how many excellent songs the play includes. Yes, the emotion is strong throughout and there’s a lot of misery in the story, but that’s intended and rings true. I thought Anne Hathaway performed admirably and wish the story had more of her plight. Women were mainly victims in Les Mis and I think that needn’t be the case to be historically accurate, not that accuracy was the goal of the musical or that it needs to be.

I wasn’t impressed by the actor who played Marius, he seemed to much of an average Joe, or average Jean, to set someone’s heart on fire with a look.

One more criticism is that this film should have actors with French accents, not English. I seem to be alone in this idea that if you’re going to make a film about a foreign country shouldn’t the actors sound like they’re from that country?

All my criticisms are minor. Les Mis enthralls and is worth repeated viewings. I expect it will garner several awards.