Starring Cary Grant, Myrna Loy and Shirley Temple, The Bachelor and the Bobby-Soxer is a musing light entertainment. Temple has transformed from the cute dancing girl to a beautiful young woman, though in this case a very fanciful romantic, named Susan. Loy plays Margaret a judge who’s Susan’s sister and guardian. At the start we see that Susan represents the epitome of teenage energy and foolishness. Her goals change weekly every time the high school has a different guest speaker. Susan sees herself as sophisticated and is blind to her own foolishness. Margaret tries to discipline her with grace, wisdom and kindness.

As the film starts Margaret is off to court to preside over the case of Dick Nugent, a debonair bachelor who’s accused of causing a disturbance at a night club. Of course, you’ve guessed that Grant is the bachelor. He arrives to the courtroom late and strikes Margaret as callow and annoying, but hardly a menace so he’s cleared and let off with a warning.

Next Nugent heads to the high school where he’s this week’s career speaker. An artist, Nugent enthralls the female students with his idealistic presentation. Susan is especially swept off her feet and hallucinates that Nugent is actually wearing a gleaming suit of armor. Before we know it, Susan is sneaking into Nugent’s apartment. Today we’d say she was stalking him, but in this farce things never get that dark.

If you’re looking for a light amusing film full of clever banter, sophisticated costumes and outlandish physical humor, you’ll enjoy The Bachelor and the Bobby-Soxer.

Taking a break from drama on the level of Human Condition, I watched Cary Grant and Irene Dunne in The Awful Truth. The Awful Truth is a 1930s romantic comedy about a married couple that races into divorce court after a misunderstanding. Each side has gotten the “wrong end of the stick.”

While they have 90 days between the court date and the divorce finalizing, Lucy, the wife, meets an Oklahoma tycoon who woos her, making Jerry, her soon-to-be ex-husband painfully jealous. Jerry no sooner gives up than Lucy realizes she wants him back.

In a nutshell: Lots of slapstick, lots of wit, lots of style and lots of fun.

The “old” movie I watched this week as part of my 2014 New Year’s resolution was I Was a Male War Bride starring Cary Grant and Ann Sheridan. Grant plays Henri, a French army officer, who must go on a mission with Catherine, an American officer. In true 1940s romantic comedy fashion, neither wants to go with the other and as they travel to find a German lens maker in a small town, they bicker continually, yet wittily, while encountering one mishap after another. In time they admit that their conflict is simply pent up sexual chemistry with a healthy dash of love, they decide to marry.

In occupied Germany after WWII, the newly married couple face a series of wacky bureaucratic problems when they set off for America on army transport. Theirs was a horrible and comical wedding night and honeymoon.

The film was rather dated and contrived. The actors did what could be done with the stilted story and I guess they were assigned by the studio to do this so so movie in a pre-TV era when new content had to be cranked out.

A list of Most Influential Films I got during Act One’s Screenwriting program included Monkey Business with Cary Grant and Ginger Rogers. Grant plays a fuddy-duddy scientist, complete with Coke bottle glasses, who’s working on a formula that acts as a fountain of youth. He’s married to Edwina, a beautiful, devoted, rational woman. It’s a screwball comedy that follows the consequences of a lab monkey’s fiddling with the formula and explores what might happen if sane adults really could turn back the clock.

The film’s light and silly, but works because you see enough intelligence and dignity from Grant, Rogers and the supporting cast which includes a young Marilyn Monroe as a young secretary who responds to her boss’ complaints about her punctuation by being “careful to get here before nine.”

Oh, yes, but fine since it’s not stupid. Still I’m not sure why this film was so influential.

The film’s theme is summed up in Barnaby’s quote:

Barnaby: I’ve i’ve decided that the formula is the most dubious discovery since itching powder and just about as useful.

Edwina: Oh I wouldn’t say that. It cured your bursistis, it improved your vision, I must say it made you feel young.

Barnaby: Hmmph. I’m beginning to wonder if being young is all it’s cracked up to be. The dream of youth! We remember it as a time of nightengales and valentines . And what are the facts? Maladjustments, near idiocy, and a series of low comedy disasters that’s what youth is. I don’t see how anyone survies it.

Monroe doesn’t figure in the story that much. She’s featured in the early part of the film and less so in the middle and end. It’s strange that she’s featured so prominently on the DVD case. It’s clearly Grant and Rogers’ film and it’s not like either are hard on the eyes.

She never wears this dress in the film 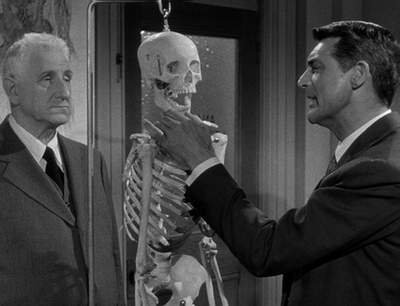 Starring Cary Grant and Jeanne Crain, People Will Talk isn’t easy to categorize. It’s not completely a romantic comedy; it’s not a satire; it’s a comedy by default. Cary Grant plays Noah Preatorius, M.D. a suave, yet eccentric doctor and medical professor. He’s the kind of doctor I like, witty and humane. For example, Dr. Praetorius refuses to let the nurses wake all the patients at his clinic (more like a small hospital) for breakfast. They aren’t inmates after all. Let them eat when they want to. Bravo!

The film doesn’t quite fit the typical Hollywood molds, which is so refreshing. I was riveted to see that this 1951 film dealt adroitly dealt with unwanted pregnancy at all. How many romantic comedies do? It was the first I’ve seen of that era that did. The Hays Code, which set a strict list of moral prohibitions for film and television, was still in effect after all. 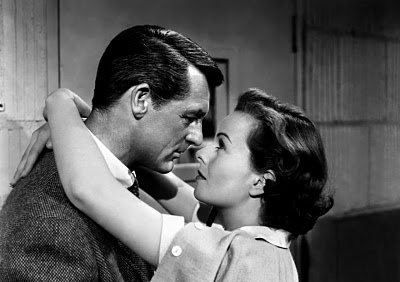 Dr. Preatorius is finishing a lecture when Deborah Higgins, a young woman who’s auditing the class faints. He tends to her and soon tests show she’s pregnant. Kind Dr. Praetorius and his staff assumed she was Mrs. Higgins, but she trusts Praetorius and confesses that she’s Miss Praetorius and the father is a former boyfriend, she really didn’t know that well. He’s went off to war, the Korean War presumably and she’s stuck. The film handles the situation with sophistication and dignity. Preatorius sympathizes with Deborah, but doesn’t judge her or make her some sort of Mary Magdelene, well, not outright.

Throughout the film, Praetorius is threatened by a petty colleague, Dr. Elwell. A peevish, envious man, Elwell spends every spare minute trying to dig up dirt on Praetorius. Given Preatorius’ odd shadow, Mr. Shanderson, a hulking, taciturn man with a mysterious past, there does seem to be a secret or that Praetorius wants to hide. Why does Praetorius always refuse to explain Mr. Shanderson?

The film is witty and the plot refreshing. I loved that the characters have opinions and make some deft jabs at political issues like agriculture subsidies and the medical profession without getting polemical. It’s done with intelligence and wit.