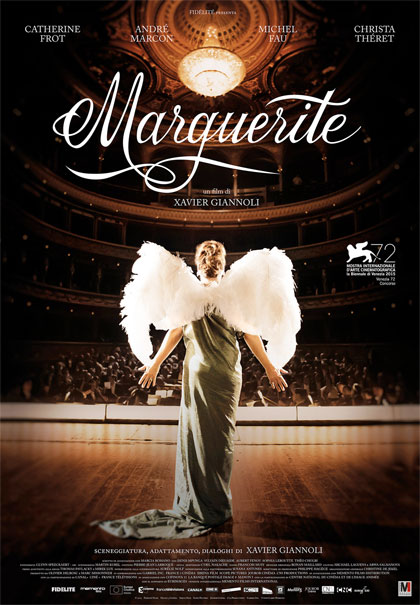 Touching and true, Marguerite (2015) is set in France of the 1920s. The central character Marguerite loves music and supports her local music club lavishing funds on them with the one stipulation that she’s allowed to sing at various concerts. The film opens with such a concert that she hosts at her mansion. The musicians and young singer who opens the performance are top notch, but when Marguerite takes the stage glass cracks and you want to cover your ears. She has no idea what pitch is. Two cads from Paris who crash the event are delighted. Their twisted sensibilities find her the perfect means of satirizing the current art scene.

Yet no one — not her unfaithful husband, her duplicitous servant, the voice coach who’s desperate for money or her friends at the music club — will tell her the truth. Encouraged by the cads, Marguerite decides to sing publicly and while many know they should tell Marguerite that she can’t sing, no one can burst her bubble.

Listening to Marguerite’s screeching and seeing her tricked all the way to the rather sad ending isn’t easy but it is enjoyable enough. It was good for a long flight and the lead actress Catherine Frot made me sympathize with and like a character who would be easy to look down on.