Kurosawa’s 1942 ironically titled One Wonderful Sunday should be called One Looooong Sunday. It just didn’t do it for me. The film depicts two young lovers on their weekly date in post-WWII Tokyo. Inflation is sky high and the couple just have 35 yen to spend. Times are tough as the woman’s shoes have soles that flap and holes. She can’t afford a winter coat and neither can he. Since they only can meet on Sunday, I assumed they both have jobs, which they never talk about.

Masako, the woman, makes every effort to stay cheerful, while despite some upswings in mood, Yuzo, the man reminds me of Eeyore, a real downer. Yuzo always sees the downside in every situation. Masako, would you really want to marry a man whom you’re forever bolstering and cheering up? Who does so little to support you?

At one point the couple tours a model home and he just complains about the poor craftsmanship, materials and high cost. Later we see where he lives. Hovel would be too kind. On the one hand, the gap shows how out of reach a good life is for the average Japanese worker at the time, on the other it showed me that nothing would every satisfy Yuzo, which is why time and again, I wanted to tell the smiling Masako to “Run!” Find someone who isn’t so needy. While some of his depression could be due to the emotional scars of serving in the war, Masako, it could just be how this guy is and he ain’t gonna change. That he just brought 15 yen for the day, while she had 20, can be taken symbolically as well as literally. 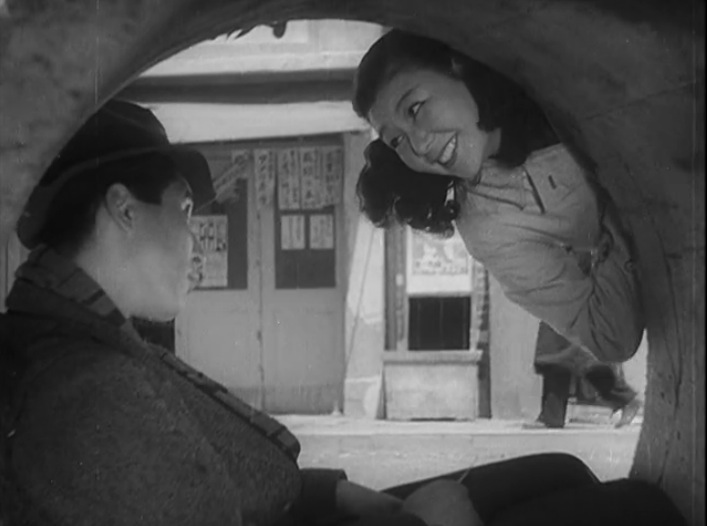 This sums the couple up completely

Masako and Yuzo had no plan for the day and ended up playing baseball with some kids, buying buns when the ball hit a bun shop, viewing a model house, meeting a homeless boy, looking for an apartment, visiting the zoo, trying to get into a concert (but scalpers bought the last of the cheap seats and Yuzo started a fist fight over that, which was understandable, but counterproductive), having tea, crying — a lot, pretending to own a café. Scenes were long — really long for me. I wished to see the couple in context because I never understood what Makasako saw in Yuzo, who seemed bipolar. The scene where Misako and Yuzo pretend to own a café, imagining the bombed out wasteland to be the site of the café was powerful. A later scene at the end when Yuzo pretends to be conducting the symphony they didn’t get to see fell flat. In that scene the depressed Yuzo gives up and Masako talks directly to audience pleading with them to clap so Yuzo’s dreams return. Evidently in Japan none of the audiences clapped. I don’t blame them at all. It was time for Yuzo to pull it together or Masako to wish him well and say goodbye.

Since Japan did flourish in the decades after this, perhaps I have too much knowledge that prevents me from liking One Wonderful Sunday . This two hour film was too long for me and Yazo infuriated me.

I began watching Julien Fellows’ Gosford Park with high hopes. After all, I love Downton Abbey and Fellows won the Oscar for this screenplay.

I was disappointed. Sorely. Despite an all star cast, Gosford Park lacked a single character I found charming or likable. There was one Scottish maid who seemed mousy but nice. She wasn’t enough to carry a film of this length. The characters all came off as cold, greedy and indolent. The upperclass people spent money like water and had nothing but disdain for each other and got no joy from their money.

The downstairs servants weren’t much better. Though not as spoiled they were all out for themselves in a different way. No warmth at all. They just wanted to get their work done with as little fuss as possible. Anyone who upset their system was glared and scoffed at.

One theme that rose was how the servants felt overshadowed by their employers. I can see that, but the grass isn’t always greener. If they worked in offices, their lives would also be precarious and as one of my new colleagues asserts if you work for one company for a long time, that company forms your identity to a great extent. So if they traded their apron for a factory uniform it’s not sure that they’d be happier or more secure.

Sexual harassment was rampant as the lord of the manor couldn’t keep his hands to himself, but in a store, office or factory women run into that too.

For the first 75 minutes we see rich people bicker, whinge and finagle for money. Now and then someone says something they think is droll and smokes a cigarette. Then the plot picks up when the lord who’s a churl gets murdered. Yet the investigation is so incompetently carried out that I just couldn’t buy it. In the end we do learn who did it, but by then I barely cared.

Fellows sure deepened his understanding about character and plot by the time he started Downton Abbey.