Part of a DVD set with three great British thrillers, The Upturned Glass stars James Mason as an ultra serious neurosurgeon who tells a college class about a case of a sane man murdering in cold blood. We soon figure out that Mason’s Dr. Michael Young is the “sane” murderer he believes exists. Dr. Michael Young meets Emma Wright whose daughter has a condition that will lead to blindness unless this talented surgeon can operate right away. As the case progresses and the girl improves, Michael and Emma grow close. Both have spouses far away and they continue seeing each other after the girl’s treatment ends. Of course, they fall in love.

So why the need for murder?

Emma is found dead and Michael attends the inquest. He can’t believe it’s an accident. He notices some strange glances between Emma’s daughter and her jealous, greedy sister-in-law, who learns that Emma has cheated on her brother. The two were never close and this was the sister-in-law’s reason to get even.

This superstar surgeon is soon taking matters into his own hands.

The film had lots of unpredictable turns and kept my attention from the first scene. Hitchcock drew upon it for some of his later films. It’s sure to entertain. 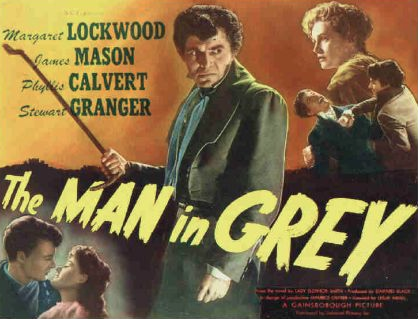 James Mason’s debut movie, Man in Grey (1943) is part of the Criterion Collection. I wasn’t sure what I was getting when I picked it up at the library. Certainly, it would be a love triangle and it was described as a melodrama, so I expected big emotions.

The film opens at an auction in a mansion where a dashing WWII soldier More than anything Man in Grey focuses on a friendship between the kind, popular, generous Clarissa and Hester, a skeptical, poor girl who meets Clarissa at a boarding school where she’s taken on as a charity case. Clarissa is a friend to all and makes a point of reaching out to Hester, who’s aloof and snubbed by the others.

Hester runs off with the first boy she meets and brings a little scandal to the school. Clarissa somehow loses her fortune and her godmother encourages her to marry the wealthy, cold hearted Lord Rohan (James Mason). Rohan spends his time fighting and betting on dog fights and ignores Clarissa telling her right after their wedding that once they have an heir, they’ll live separate lives.

Later Clarissa sees Hester, who’s become an actress with a mediocre theater troupe. She convinces Hester to come visit her to relieve the boredom and isolation she suffers. Clarissa’s also brought Toby, a servant at the boarding school home with her.

Clarissa appreciates staying in Clarissa’s mansion and when she meets Lord Rohan is attracted to his dark, brooding personality. They’re more or less kindred spirits and an affair ensues.

As chance would have it Hester’s co-star, another 2-bit actor, is smitten with Clarissa and pursues her by taking jobs that put them in contact. He sees through Hester’s schemes.

Unwilling to play second fiddle to Clarissa, Hester takes action to get her out of the way.

I had an odd response to the film. I can’t recommend it, it seems dated and isn’t so bad it’s good. Still it was interesting enough to finish and see what would happen. Clichés abound as the dark haired woman, Hester is bad and unlikeable throughout and Clarissa, the blond is more virtuous. Toby is meant to be Black, but weirdly enough they hired a white boy to play the role and covered him in make up that looked like shoe polish. Clarissa has him dressed as if he was at an Indian court or like a 17th century footman.

The film was melodramatic somewhat like a cheap romance novel. I didn’t understand why this was a Criterion Collection film. I did read on their website that it was a highly successful film due to the racy story, which seems pretty tame, though most Hollywood films now don’t show the “fair-haired girl” cheating on her husband.

The essay on Criterion’s site offered this explanation:

With its overheated emotions and air of bodice-ripping unrefinement, The Man in Grey both flouted new guidelines from Parliament encouraging studios to produce tales of nobility and sacrifice for wartime audiences and disgusted critics, who saw it as the stuff of cheap paperbacks. This mattered little to moviegoers, who not only gobbled up the film’s plot twists, making it one of the year’s ten highest-grossing films, but also delighted in its fresh crop of stars, especially Mason, whose sensually cruel Rohan made him an overnight sensation. Despite its guilty pleasures, though, The Man in Grey is hardly frivolous: beneath its pulpy exterior, there’s a sophisticated depiction of the ways class and gender inform social interaction.