Winner of the 2018 Palm d’Or at Cannes, Shoplifters was at the top of my to-watch list. It’s now out on DVD and I got it from the library after a short wait.

Set in Tokyo, Shoplifters takes us into the hovel where a motley crew makes up a family. Early on it’s quite foggy how this grandma, mother, father, teenage girl and boy related. They live hand to mouth off of the grandma’s small retirement allotment, the mother’s wages at a commercial laundry, and by shoplifting. The teenage girl works at a kind of sex shop, but it seems she can keep all her earnings.

The “dad” teaches the boy to shoplift and during one of their sprees, they discover a young girl of 4 or 5 who’s neglected and abused. They coax her to come home with them because they feel sorry for her. This quiet girl, whom they name Lin, comes to feel at home with this rag tag family, that doesn’t follow society’s rules.

They are a likable bunch even though they take advantage of each other quite a lot. They keep secrets from each other and

The way the film delves into poverty I was reminded of Kurosawa’s and Renoir’s The Lower Depths. You know that the characters’ behavior is the main reason they’re stuck in poverty. Since the Shoplifters features children, it pulls the heartstrings more than Kurosawa and Renoir’s films.

I found Shoplifters charming, but also depressing in parts. Yes, there were moments that highlighted everyone’s generosity and kindness. Their quirks were endearing. I thought the sex club that the teenager worked in to be disturbing, particularly the first scene there. Later we learn more about the grandmother’s role in the girl’s life and her plight of prostitution, though not entirely revealed to the grandmother is even more disturbing.

While I didn’t want an unrealistically happy ending what we got was too abrupt and I wanted to know more about what happened to the teenager.

All in all, despite good acting, I was disappointed by Shoplifters as the story’s rather bleak and it left too many bows untied.

François Truffaut’s Small Change (1976) was the first foreign language film I can recall seeing. I distinctly remember some neighbors raving about it and I was astonished by the idea of seeing a film in another language. A think our parents thought Small Change would be edifying so we were piled into a car and a group from the neighborhood all went. I remember being delighted by the scene when a toddler’s left alone and falls out of his apartment window, but remains unscathed. “Gregory go boom!” the boy exclaims to the petrified crowd.

The film still delighted though I did wish for more plot. Truffaut is wonderful with children and understands their lot better than most. The mischief of kids making a mess whenever the adults get caught up in their own lives, the innocence of looking for love, and the loneliness of hiding your family’s poverty or abuse are all present in this brightly colored panorama. Childhood’s changed in many ways with helicopter parents and high tech developments, but some of comedy and even the tragedies still remain. 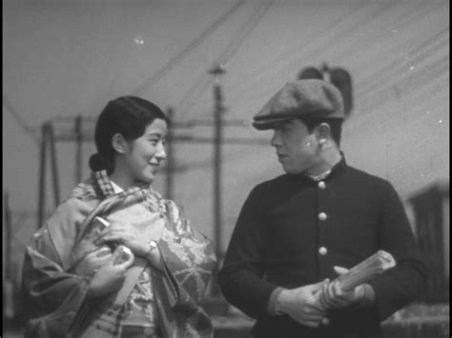 Directed by Mikio Naruse, Street Without End centers on Sugiko, a beautiful young waitress. All the customers are smitten with her and when she walks down the street a talent agent stops her to get her into the movies. Her best friend and roommate is a little put off, but when Sugiko gives up the idea of a film career, the friend gets hired by the studio.

One day, Sugiko gets hit by a car. The wealthy driver takes her to the hospital and gets smitten. She wasn’t hurt badly and the rich man soon starts courting her. His mother and sister disprove but soon the two are married.

The silent film can be touching and it does show pre-WWII Japan, but compared to most people, who lack Sugiko’s luck, her life isn’t all that rough. So it was hard to get into this film, though I can appreciate some moments. Later Naruse made a mark for films about women who had major struggles.