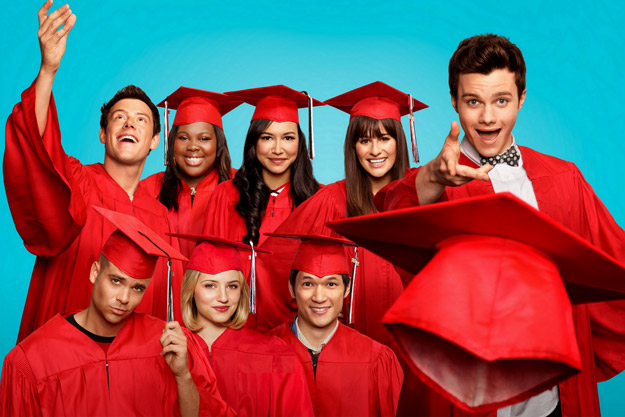 Well, I predict the disappointing season 3 of Glee won’t sell many DVDs. I’d hoped for better with the finale, but while there were a few good moments, it was really just a mishmash of emotion and storylines, that seemed thrown together.

It’s been a year of far-fetched incidents and caustic humor that’s grown old. This episode was no exception. It seemed that after winning Nationals, the writers didn’t know what to do with the cast. Quinn helped Puck study for his make-up exam and her flat-line emotion inspired him to buckle down and get the C- (a Puckerman A) he needed to graduate. Whoo who. So much for music improving students’ grades.

Finn fooled Rachel, who got into NYADA,  into going on to New York on her own and this manipulation was packaged as a positive. While she probably should go, it would have been better if she decided to with Finn. This is 2012, right? Then out of the blue, more or less, Finn decided to enlist in the army. Quite a squandered event as no one but Rachel gets to challenge his signing up and when she sees the lights of Broadway, Rachel quickly forgets that her true love is most likely headed to Afghanistan. Are we to think she’s that vapid?

At one point, Will confesses to Finn how he planted the pot in Finn’s locker to get him to join Glee and Finn thinks that’s cool. He might have reacted that way, but it really didn’t seem worth mentioning after all this time.

One high point was Burt Hummel‘s dance to “All the Single Ladies” which he offered to Kurt as a graduation present.

Blaine, who really should return to the prep school where he’ll learn more, brought up the topic of breaking up with Kurt. After all long distance relationships are hard. Yeah, but Blaine, you’ve got all summer with Kurt so why mention this now? That’s what irks me about Glee, it’s far fetched when it doesn’t have to be.

Santana toyed with the idea of going on to New York and it seems she is NY bound. Her mom, played by Gloria Estefan, first wanted Santana to go to college as she hadn’t and the mom had been scrimping for years for the tuition. Their discussion was very rational and non-dramatic compared with real daughter-mother discussions of this sort. Santana’s gotten too mean and caustic for me to really care about her. She’s one dimensional and it’s hard to see what Brittany supposedly finds to love. I think this character, like many on Glee, is just a lump of clay that writers shape as they like without thought of consistency.

It was odd that during graduation, this little club that is a bleep on the school’s radar was so prominent in the graduation ceremony. McKinley seems to have students graduate in random order, neither alphabetical or reverse alphabetical order. This episode and the previous one about nationals points out one strange omission of Glee. In this era of hover parents, these characters’ parents, except for Burt, have been implausibly absent. I think the writers have missed out on good stories by neglecting Quinn’s parents after the first season and Rachel’s till this season. Seasons two and three could have been richer by bringing in more conflicts with parents. That’s a big part of teenage years and fits with our times.

I do hope Kurt doesn’t just mope around Lima for the next year. He can and should get into college. I’d expect him to have the brains to find another interest that he can cultivate. 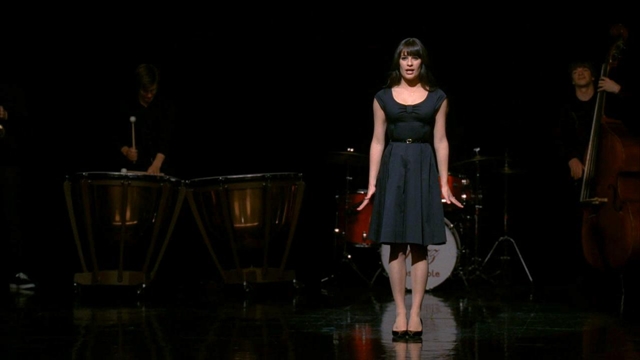 Wish we’d heard more of the song before she choked

Ah, I saw the Glee episode Choke, and well, it was okay. So many of this season’s episodes have been just that: okay. The problem is I’m showing my students season one and those are fresh and absorbing. Mind you I’m watching them for the third or fourth time and they still entertain.

It was dramatic that Rachel choked on her audition for NYADA.  Sad, since she’s the best performer and unjust, but it was realistic and now there are opportunities for her to do something different. I didn’t like or buy that NYADA would send a famous woman to Lima, OH to listen to two students. Not in a million years. Also, it would have been more dramatic if the audition included lots of hopefuls just like Kurt and Rachel. Whoopi Goldberg‘s role could have been played by anyone. She was on so briefly, that I doubt I’d have hired her, better to use an actress from a good theater company like Steppenwolf and save some money to donate to a woman’s shelter.

Now for the domestic violence storyline, which seemed so forced and preachy. This is a real issue, but it didn’t work here. Why wouldn’t Sue, as a teacher, enlarge the number of girls she wanted to teach or preach about domestic violence to? She would bring in all her Cheerios. She just would. Yes, she just heard Santana and company making light of the issue at Coach Beast’s expense, but that’s usually a sign that the average student would do something like this. Hence an educator would want to reach all students, even young men. It’s not simply a women’s issue and Sue’s smart enough to know that. I could see the prolonged abuse Coach Beast is experiencing a mile away even before she lied to Sue. A good story would have been harder to predict. Also Coach Beast is the obvious candidate as a victim so it would have been more interesting for the swimming coach to have been beaten, after all, she’s most like Santana, whom needed to learn that she’s not invincible.

Puck’s flunking rang true but his father showing up at just the right time was so contrived. Who actually takes European geography? I’d believe him flunking Geography and then you could still have him sing “The Rain in Spain.” There were times when I watched and I channeled Sue. I just needed a megaphone to yell, “Sloppy! You writers are sloppy!”

Sam’s character seems so lame, so not like any Christian I’ve met, and I don’t mean that as a compliment. I can’t buy that he’s been so sheltered that he’s stupid, yet he sports edgy hair and tattoos. He sports the look of the cool edgy alternative home school kid, not the dweeb. His infatuation with Quinn could be interesting though.

I can’t believe it but though, One Tree Hill was never as good as the first season of Glee, it held it’s own for the first three seasons.

Glee‘s Episode “Yes/No” was full of proposals. Kudos to Will’s grand, dare I say over the top nautical, proposal to Emma. For a minute it seemed like he’d call the whole thing off as her parents were so against it, but Emma’s impassioned speech helped Will see clearly.

The show also meandered with Sam and Mercedes. Supposedly, they’d had a summer romance and he wanted to start things up again, but since Mercedes is dating a football player she nixed that idea. The whole storyline seemed cobbled together. Yet Sam’s not defeated so in the weeks to come, I suppose there will be more.

The plotline with Becky asking Arnie rang truer. She had eyes for him, but he just wanted to be friends. Poor Becky. She does have Sue to console her and act as a role model. Again, poor Becky, but lucky Sue because that’s the one relationship that keeps Sue humane.

Out of left field, Finn decided to propose to Rachel. Since his parents and Will, convinced him not to follow in his dad’s footsteps and join the army, Finn’s desperate to give his life purpose. The story of his dad having a drug problem after the war, seems 100% contrived. If that had been a secret the mother kept for sometime then, I’d buy it and there’d have been more drama. It was good to finally see a new episode, but I felt manipulated by Finn’s proposal at the end of the show. Just as Rachel seems to.