I hadn’t heard of director Andrei Tarkovsky before. Nor had I ever heard of actor Nikolay Burlyaev. I haven’t seen many Russian films and I wasn’t particularly looking for a difficult film but something about Tarkovsky’s WWII film Ivan’s Childhood (1962) grabbed me though it took a while.

Around 12 years old, Ivan dreams of his idyllic childhood playing at the beach, chatting with his young mother, running freely. Then he wakes up. He’s in a dark, war-torn, God-forsaken landscape. He trudges through a murky river (which looks like a marsh, but it’s a degenerated river and a symbol the effects of war) before he’s captured by Russian soldiers. Back at the soldiers’ post, Ivan is fierce and orders the soldiers about. He orders the soldiers to call “Number 51 at HQ.” They try to put him in his place, but you’ve never seen a fiercer 12 year old. Played by Nikolay Burlyaev, Ivan is like no character you’ve ever seen. In the dream sequences he’s pure and innocence; once he’s orphaned and becomes an army scout Ivan’s transformed to a force of nature on par with a hurricane.

Ivan prevails in convincing his comrades in arms that he should continue his reconnaissance work and not get shipped off to the much safer military school. Viewing the film, I knew that the soldiers should not have agreed, but that’s where the suspense comes in. 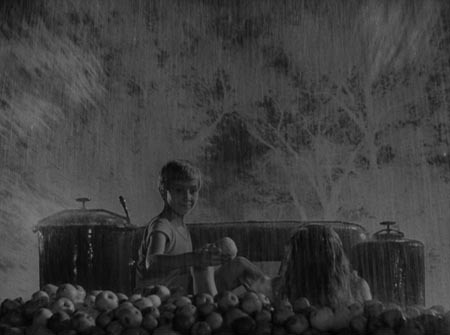 Tarkovsky gives us amazing images like none I’ve ever seen. He believed in using the environment like the murky river, a bombed peasant farm house and a white birch forest speak volumes. I’ll never forget the dream sequence when Ivan and a little girl are riding in a pick up truck filled with apples. The sky and trees are shown in the negative, which was mind-blowing.

There’s a lot of intense emotion. One example is a scene with an officer flirting with a female junior officer who’s very tentative. He wants her; it’s not clear what she wants. Without graphic nudity or direct language Tarkovsky gives us a powerful scene of cat and mouse in the birch forest that goes on forever.

The Criterion Collection DVD comes with fascinating extras including an interview with the now grown (i.e. middle aged) Nickolay Burlyaev, who recalls how hard Tarkovsky made him work to get the part and then how kind and sensitive the director was during the filming of this emotionally intense story.

I found the film challenging to watch. It’s no day at the beach, which is fitting for a war film. Yet Ivan’s Childhood is well worth watching.